This is not the first time I’ve promised to get back into blogging. It’s happened fairly often over the last year and a half (has it been that long already?), and it’s unrealistic to expect you to believe me now.

So here’s the deal: this is not a revival, this is a reboot. This blog is now a separate entity in my mind. All the old posts are still here, and I’ll likely be writing on similar topics to an extent, but I will be approaching it with a completely new attitude toward writing and some entirely new topics that I hope you’ll enjoy. I’ve come to appreciate a considerable new array of explorational avenues over the time since my regular blogging lapsed, and I’d like to put some of that out there.

Let’s take a look at what I mean.

My first post to this blog, on January 1st, 2020, was about the name “See With Eyes Closed” and why I chose it for this blog. I named it after two very specific quotes:

“And now here is my secret, a very simple secret: It is only with the heart that one can see rightly; what is essential is invisible to the eye.” - Antoine de Saint-Exupéry, The Little Prince

All fine and good. The problem was that my analysis of these quotes was very poorly written and really didn’t capture the actual meaning of the quotes, given the larger context.

Over the next few weeks, I’m going to be doing some musing on these quotes and what they mean to me, taking into account the surrounding context, and I’m going to post an analysis in December on the results. Hold me to that, please. If you want to contact me, the easiest way is to reply to one of the digest emails (I’m told the comment form is broken, and upon testing, so is the contact form—I’ll have to work on that).

Why redo that post? Well, the biggest reason is that I’m a better writer now. Part of that is due to this very blog; I notice a significant difference in quality between my early posts (though some are pretty good) and my more recent ones. The rest is because I now am more confident that I want to make writing my career. When I started this blog, it was mostly to test my coding skills and because some of my friends (and my English teacher) also wrote blogs.

Now I’m writing for myself and for my audience. I have a goal. That’s the difference.

Since you’ve heard from me last, the most significant change is that I am now an avid advocate of FOSS. I’ll unpack my reasons for this in future articles, but I now have a very marked preference for apps that are open source and am publishing all of my own code (including this blog!) under open source licenses.

Expect to hear more from me about this in the coming months (I’m strongly resisting the urge to post a list of FOSS software now), though likely not next month because…

This November is National Novel Writing Month, more affectionately known as Nanowrimo! The goal of Nanowrimo is to, in only the thirty days of November, write a fifty thousand-word novel.

Wait a second— back up. Did I say my fourth consecutive year? Why didn’t I say anything about it last year, then?

The embarrassing truth is that I just dropped the blog during November last year. Looking back at the archives, you may notice that I was on a roll with writing articles leading up until October 8th. Then nothing got posted until February of this year. That was because Nanowrimo—the biggest writing event of my year—ironically distracted me from writing here.

So what’s going to change this year? Here it is, in two simple words:

That’s right, I will be sharing quotes from my draft with you regularly over the month; at a minimum, I’ll post once per week, but it will likely be more often as I reach points in the story I’m excited about.

This Friday’s article will be a summary of what my premise is; I’m really excited about this year’s novel!

There’s one other bit of novel-related news…

For this year’s Nanowrimo, I coded my own novel-editing program. That’s right, my very own. Here’s a screenshot from a few weeks back (it’s still not entirely done): 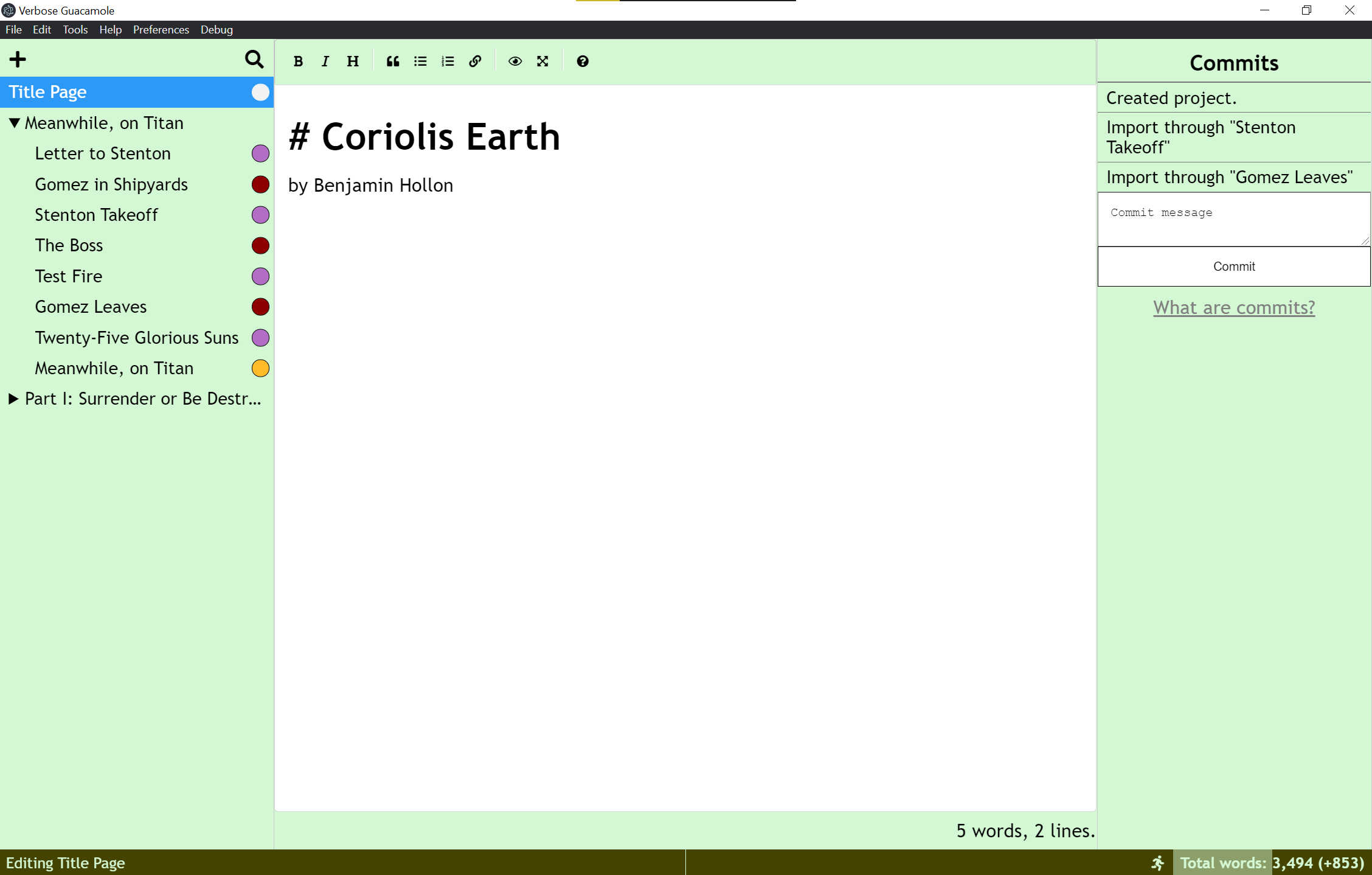 I’m planning to release it in a couple of days, so look out for an announcement about that! I’ll include it in the weekly digest this Saturday and will likely mention it en passant in this Friday’s article, but you can also view the work-in-progress website I’m building for it at verboseguacamole.com! (There are no macOS installation instructions yet—rest assured, that is coming. I don’t use macOS, and Apple has some very anti-competitive policies about third-party apps that make it hard, and I will likely rant on in a later article, so tl;dr, I’m saving figuring that out until after I’ve finished everything else.)

My plan is to have at a minimum one blog post per week. Some weeks, like this one, I’ll have two, especially as I’m getting back into blogging and have a surfeit of ideas. Each week, I will also be sending a single email update.

Thanks. Thank you, readers, for being here and reading anyway. I sincerely apologize for all my inconsistencies and issues in posting in the past, and I’m really grateful for how you’ve stuck around anyway. I’ll try to repay that trust you’ve given me.

What did you think?

There aren't any comments yet. Be the first!

I send out a weekly digest of new posts, projects, and things I'm currently working on. If you'd like to be a part of that, subscribe below. Can't wait to see you there!